Implementing a liquidity pool with Python

In this post, I will implement a liquidity pool using python and regular data structures, with no blockchain, and no contract code. The intention is to get a better understanding on how liquidity pools work economically, without diving in blockchain development details.

Liquidity pools are an essential part of Defi because they enable users to exchange tokens without the need of a trusted mediator, as is the case with centralized exchanges such as Coinbase.

This mechanism can be understood as a black box that enables unstoppable and automated trading based on prices defines by an algorithm.

The constant product formula is described below, and its result must remain constant despite the size of the trade, meaning that the total amount of liquidity on the pool remains constant:

This results in a seesaw effect, when the value of one token increases, the value of the other decreases, and vice versa. The formula dictates each transaction’s price, regardless of how much of either token is bought or sold at any given point.

As mentioned in the previous topic, smaller markets are subject to high price fluctuations due to the algorithmic nature of the pools. Liquidity providers are rewarded with transaction fees for allowing other traders to buy and sell using your liquidity. However, this is not a risk-free investment, one also needs to account for impermanent loss, which takes place when a trader places their tokens within a liquidity pool and then the price changes. The value of those tokens is now less than it was at the time of the investment, which means if you remove them now, their value will have decreased.

These losses are called impermanent because until you remove the investment from the liquidity pool, the loss is not materialized. You can wait to remove your liquidity until the exchange reaches a favorable point (but this can never come to fruition).

Other than the risk for liquidity providers described in the previous section, there is also systemic risks of interacting with these mechanisms.

These markets are self-sustaining because they don’t need intermediaries. Formulas power smart contracts that provide security and confidence for investors. However, you need to verify in order to gain confidence in the project you are using, contracts can have bugs, founders can be ill-intentioned (e.g. create backdoors on their project to remove profits), and the ecosystem around the protocol can collapse (e.g.: Terra disaster), and etc.

We want to enable the following functionalities:

Some general notes on how we want to approach this implementation:

Liquidity pools will be called Exchange and as mentioned previously the implementation will be made in Python.

All the storage needed is reserve0 and reserve1, to hold the number of tokens of each asset. Other attributes are secondary and are used to ease implementation and keep a record of what’s happening in the pool.

Adding liquidity to the pool

Adding liquidity means updating the reserves to enable trading. When adding liquidity to a pool for the first time, the pool’s creator determines each asset’s initial price. However, if the pool’s pricing does not match that of the global crypto market, the liquidity provider risks losing money.

After the first time, the liquidity added to both pairs must match a minimal value, which is defined by (amount0 * reserve1) / reserve0.

A visual example is the image below, the algorithm will force the user to always add the same amount of liquidity to both assets in the pool. 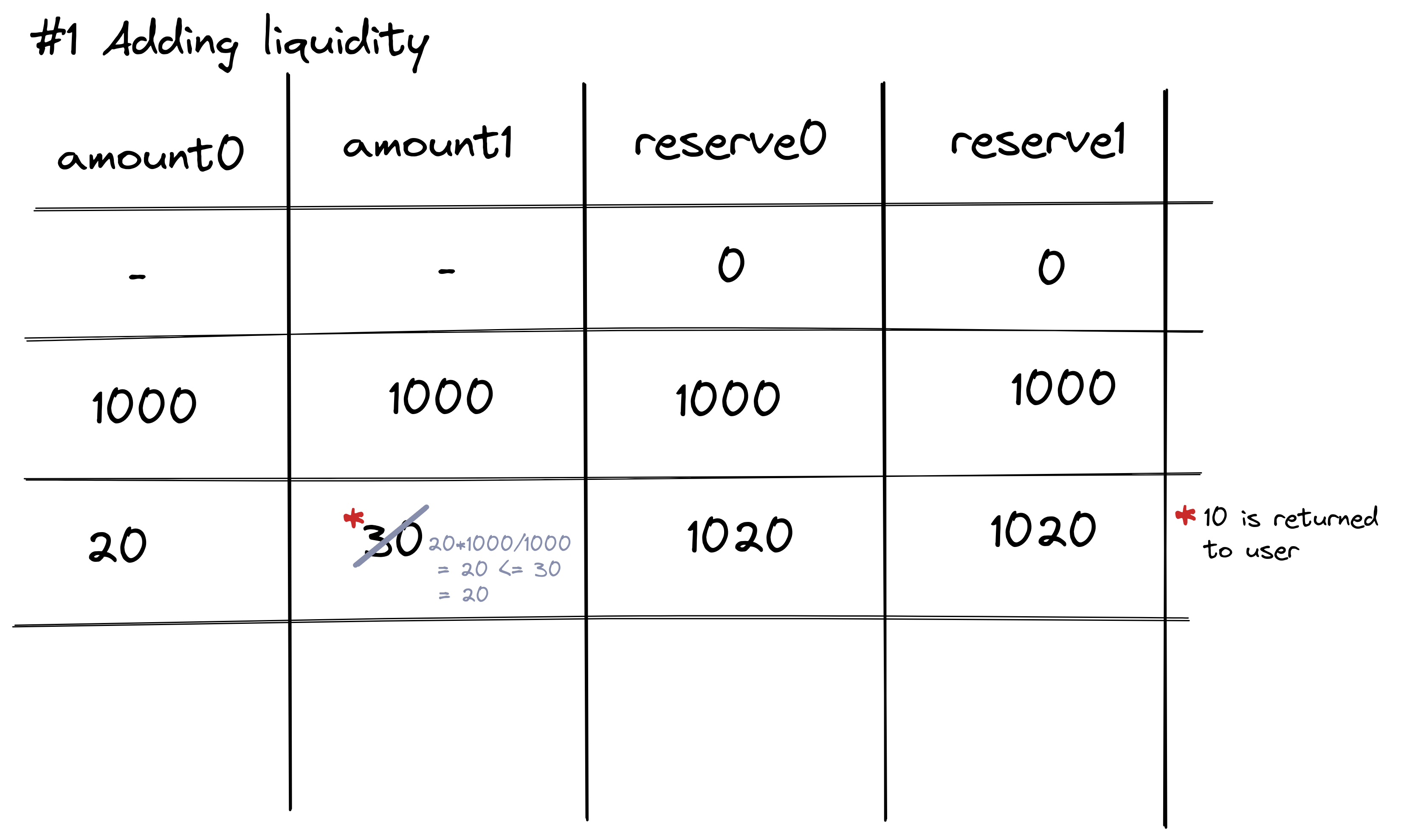 This is extremely important when the pool is unbalanced, due to trades and negotiations that make the pool price equal to the market price. 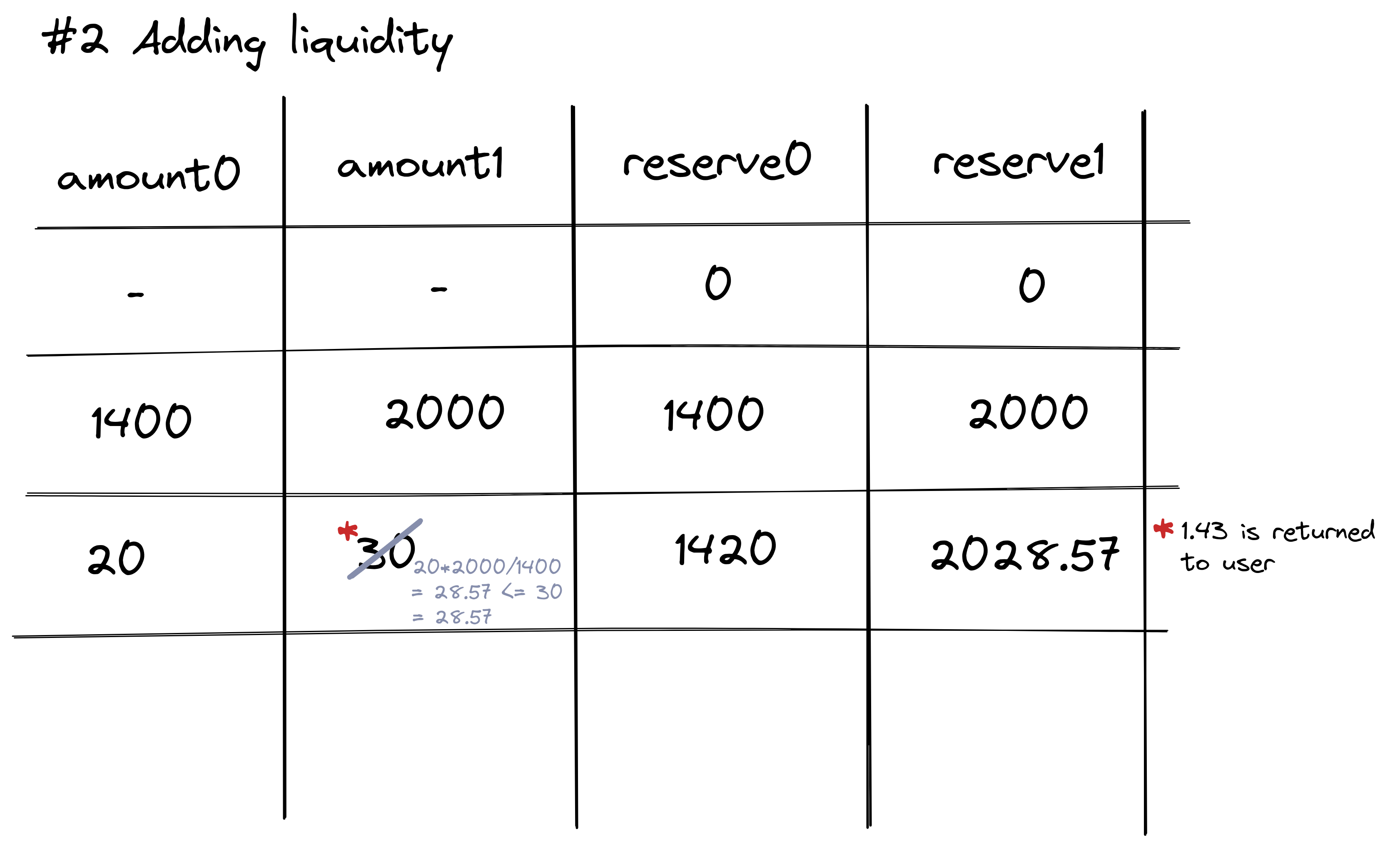 The implementation to swap tokens has more assertions than the actual code. The magic happens in the get_amount_out function, which calculates the correct amount out given the reserves of the pool.

In this post, you just saw how to implement a liquidity pool using python and regular data structures, no blockchain, no contract code. A more complex implementation replicating the architecture used on smart contracts can be found here.